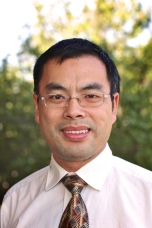 Berlin Fang’s career is a mixture of instructional design, educational technology, literary translation, and miscellaneous writing. If forced to use one word for his role, he’d say he is a translator.  At his job as the Director of Instructional Design of Abilene Christian University, he translates courses from face-to-face format to online teaching.

Berlin also translates personal experience into an accessible language for audiences through his writing. He is the author of eight books, including a trilogy of essay collections about the American life from the eyes of a resident alien.  The most recent one is called “Tea Eggs under the Star-Spangled Banner.”  All of these books are in Chinese. Unless you read the language, you may have to take his word for it if he claims these are good books. Berlin has also written for media or sites in several countries, including China, the United States, the United Kingdom, Qatar, and the Netherlands.

Berlin brings rich cross-cultural perspectives to topics ranging from cage-free living of a few individuals to the comparison of unions between the United States and China. After turning 40, advertisements about hair loss in his mailbox made him realize that he is quite mortal,  and it does not serve him well to be jack-of-all-trades in his writing. He started to “focus” more on education. He also writes book reviews for Chinese media on books he finds in English. Some have resulted in these books being translated into Chinese.

There are also times Berlin literally translates. He has published fifteen books of translation, mostly of fiction, including classics like William Faulkner’s The Sound and the Fury and contemporary author Column McCann’s Let the Great World Spin.

Berlin came to the US in the 2002 and continuously moves south to avoid parallel parking. He now lives in Texas. He can be contacted at berlinfang@gmail.com.